While we’re gearing up for the fall debut of The League of Young Inventors, we thought we’d share some insight into the ideas that inspired the creation of the League. In this entry, we’re talking about two of our favorite television series for parents.

“How We Got to Now” – the innovations that changed our lives

2014’s “How We Got to Now,” is a PBS series created and hosted by Brooklyn writer Steven Johnson. Johnson sees invention as occurring naturally from our human understanding of the world, which is influenced by how we use it. For Johnson, inventions aren’t just scientific breakthroughs; they are closely connected to our human curiosity, our desires, our needs, and even our emotions. Each invention Johnson investigates is a product of place and of circumstance, and each invention leads to the creation of another, creating a network of inventions that branch out toward our modern world in sometimes strange ways. Johnson uses a thematic approach which works really nicely to give viewers historical context as well as a well-defined structure. This is something inventors themselves do – they think in themes and patterns that allow them to see the different applications of an invention, or the way that parts of one invention can be used in a completely different invention. It’s great to see this thematic process in action.

Each show in the series – “Glass,” “Cold,” “Sound,” “Cleanliness,” “Time,” and “Light” – tells the story of the way the innovations within these themes changed the world, and are full of fascinating information. Did you know, for example, that in the mid-1800’s the entire city of Chicago was lifted, building by building, with jack screws, in order to create its sewer system? Or that the invention of flash photography was instrumental in the poverty reform movement of the early 1900’s? Johnson is a wonderful storyteller, and the way he sees the history of invention and innovation through these different themes will get you and your family talking not only about inventions, but the different ways we can link inventions together. You can watch “How We Got to Now” online, for purchase at Amazon, YouTube, and iTunes. Clips of the series are available at the show’s PBS website.

“Connections” – the human side of technology

“Connections” is a BBC series from the 1970s. Hosted and narrated by James Burke, “Connections” was probably the first television series to look closely at the history of invention. James Burke starts the series by talking about the “technology traps” of modern life – such as the electrical grid – and what happens when technology fails. This leads him to the question: could we live without modern technology? How much could we figure out on our own, given that our modern life relies on such specialized technology? And where would we have to start in order to rebuild civilization? It’s a question that has greatly inspired The League of Young Inventors. What do we need to know in order to build (or rebuild) our modern lives? What is important to learn about the way the world used to work, and how does that help us to figure out ways in which our world works today? A good working knowledge of our technological past helps inventors create new technology from the old. Its one of the things inventors do – they look at the past for inspiration. 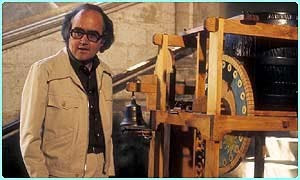 Burke’s series traces interesting – and sometimes surprising – lines of invention from early history to modernity. For example: we can thank our current computer technology to the early punch cards of the Jacquard loom. Burke looks at invention as part and parcel of human history. It is connected to fashion, trade and commerce, politics and warfare, geography, and all sorts of other things that make up our world. Invention comes from people, doing things for themselves and their desires, without any preconceived notion of where those inventions may lead. This is one of the many reasons we love James Burke: he understands that technology is part of the human world, so it has to be understood as social, and inventors as people rather than “geniuses.” This means that we all have the chance to change the world, by making and remaking it to suit our needs. The more we understand the way these changes have worked in the past, the more we can adapt technology to fit our world today. The series is entertaining and fascinating, and our kids have enjoyed watching it as much as we have. You can find episodes on YouTube, dailymotion, and Vimeo, or you can purchase the complete series on DVD from Amazon.

Watching both of these series is a great way to get your family thinking and talking not only about the inventions themselves, but about the different ways we can interpret the history of invention, and the ways in which we can see the connections between invention and human life.